The lighting experts at Vaughan talk us through how the brand successfully lit the bathrooms in prestige projects such as Gleneagles, The Ned and St. Ermins…

Lighting brand Vaughan was one of the first companies to provide bathroom lighting that was both functional and refined when they began designing lights for this purpose more than 15 years ago. 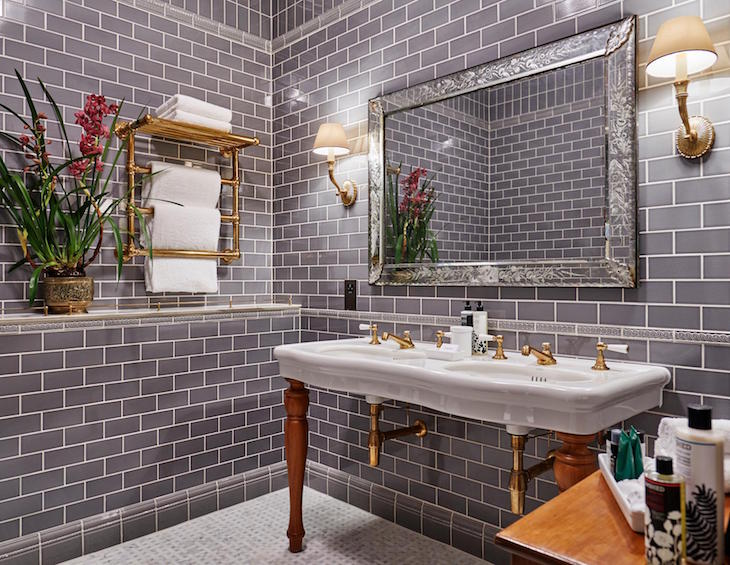 Although bathroom lights need to be equipped with an IP44 rating, the company recognise that clients require a product that kept in line with their visual aesthetic.

Throughout the past 15 years, Vaughan’s bathroom lights have been featured in numerous hotel projects – from the Soho House Group to Firmdale Hotels, as well as stand-alone projects including Claridge’s and Grantley Hall. In the past year alone, Vaughan have provided lighting for more than 50 hotels across the United Kingdom and Europe. And here are just a a handful of them.

Nestled in the centre of London, the Ned is architecturally more than 100 years old – and was originally known as the Midland Bank building. Now renowned for being a hotel, the Ned is the shared project of Nick Jones, founder of Soho House & Co., and Andrew Zobler, CEO of New York’s Sydell Group. Thanks in part to its longstanding relationship with the Soho House Group, Vaughan supplied the Ned with the Sudbury Wall Light for a number of their bathrooms.

Made from solid cast brass, decorated with a scalloped edge and given an antique brass finish, it is one of Vaughan’s early designs – one which is more traditional in style yet still stands the test of time. Featuring a distinctive, ribbed, scroll-shaped arm, and beaded detailing, it showcases the variety of texture that is made possible thanks to the lost wax casting process.  Placed on each side of the whimsical oval-shaped mirror, the Sudbury Wall Light subtly complements the brass accents that Jones has implemented – from the door handle, to the bathroom taps, and the towel rack too.

Located in Perthshire, Scotland, Gleneagles formally opened its doors in 1924. Described as “a Riviera in the Highlands”, it was initially conceived thanks to the vision of Donald Matheson, General Manager of the Caledonian Rail Company, whose railway line ran through its picturesque terrain.

Following a refurbishment from 2015 – 2017, Hotel Designs reviewed the hotel, and noticed  Vaughan’s Seaton Storm Wall Lights feature in a number of suites. 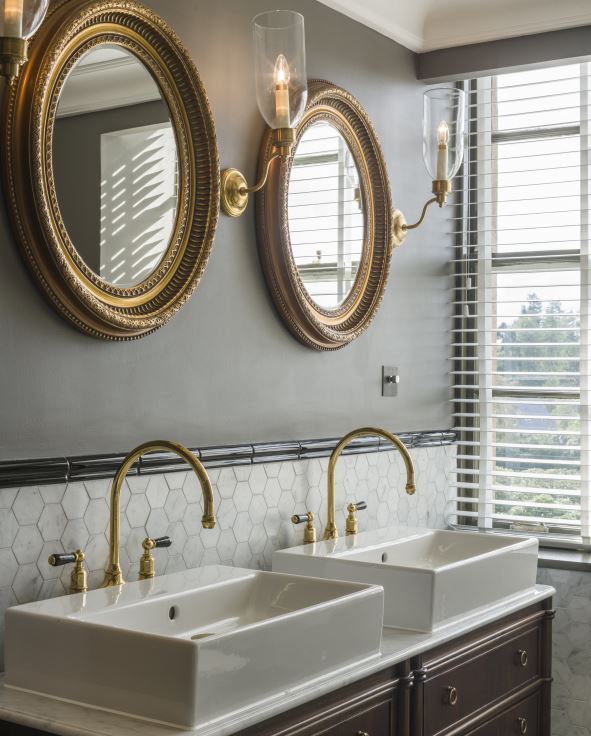 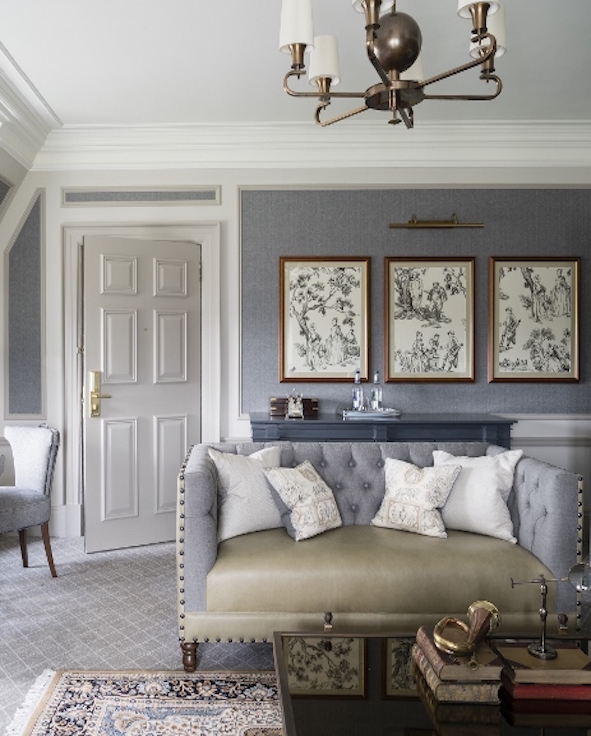 Based on a traditional ‘hurricane lamp’ that was originally designed for candles, it comes with an elegant glass shade and is pictured here with an antique brass finish.  A delicate combination of hot forged brass and glass, the Seaton is a simple design, with minimal decoration, yet is executed with precision and care.  Similar to the bathroom interior at the Ned, the Seaton Wall Lights continue the theme of brass, and neatly unite themselves to the taps, mirrors, and drawer handles to create a cohesive room set.

The bathroom at St. Ermin’s offers a departure from the brass theme previously discussed, in a decidedly more contemporary interior with pink wallpaper, mother-of-pearl mirrors and sleek, black marble. Situated just around the corner from St. James’s Park in London, St. Ermin’s is an independent hotel yet is also part of Marriott International’s ‘Autograph Collection’. 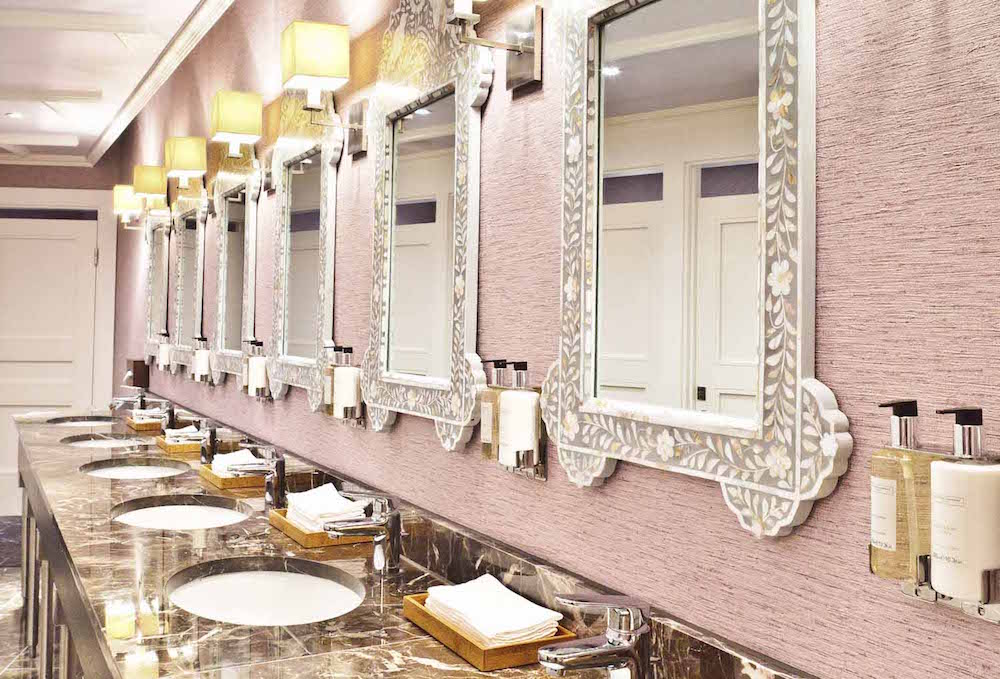 Image caption: Vaughan’s Norfolk Wall Light can be found in the bathrooms at St. Ermins Hotel

For this bathroom, Vaughan provided the Norfolk Wall Light in a sleek chrome finish. Placed either side of each mirror, the wall lights are topped with a square fabric shade which softly diffuses the light.  Like the Seaton Wall Light, the Norfolk is a simple design and form – featuring a rectangular backplate, square candleholder and angular arm.  When combined with the oval sinks, cylindrical worktop legs, and rectangular mirrors, it creates a satisfying, playful interior – one that is predominantly focused on the relationship between different geometric shapes.  Made with a base metal of hot forged brass, the Norfolk is available in a number of finishes – from the chrome one pictured here to antique brass and nickel too.

Variety, as well as quality, are two central components to Vaughan. Product design is meticulously developed and lead by Lucy and Michael Vaughan, co-founders of the company, and their shared background as antique dealers is without a doubt an underlying influence in their creative process. “Our creative process is very much cyclical, updating and reflecting on products we’ve already made and antiques, which we have seen throughout our time as dealers,” said Lucy Vaughan.

For Vaughan, bathroom lighting is no exception – with a variety of styles, finishes, metals and shapes available to both retail and the trade, and a clear alignment with the brand’s existing lines. Ranging from the more subdued Beverley Wall Light to the more ornate, glass-art beauty of the Morillon Wall Light, Vaughan offers a wide selection of bathroom lighting to choose from, while remaining committed to their pursuit of quality and craftsmanship.

Main image caption: Bathroom lighting by Vaughan inside The Ned